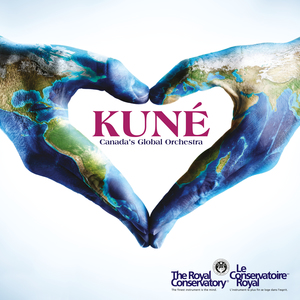 KUNÉ – Canada’s Global Orchestra – was developed from a major initiative by The Royal Conservatory of Music in Toronto to explore and celebrate Canada’s cultural diversity and pluralism. The ensemble seeks to communicate in ways that words, politicians, and spiritual leaders cannot, and help to find a common language ...

through music. KUNÉ (which means “together” in Esperanto) released their debut Album on Universal Music Canada in April 2018 and will embark on their first US tour in the 19-20 Season.

The musicians hail from all corners of the globe—from Peru, Burkina Faso, Cuba, Ukraine, and beyond—and are now living in the Toronto area. The eleven musicians of KUNÉ play instruments as diverse as they are, from the tar of Iran to the bouzouki of Greece to the sitar of Pakistan. Over the course of 2017 the ensemble shared each other’s cultures and musical traditions as they rehearsed, composed, and gave workshops and community concerts.

With the release of their first album KUNÉ - Canada's Global Orchestra (released last year on Universal Music Canada) Toronto-based multicultural super-group KUNÉ offered up a coherent musical voice that evokes the collective spirit of the immigrant’s journey, an out-of-placeness that is at once a homecoming. Comprised of eleven virtuoso musicians from just as many countries (Brazil, Pakistan, Greece, China, Burkina Faso, Cuba, Peru, Mexico, Iran, and Turkey and joined with one Métis indigenous to Canada) the band’s sound encompasses many disparate world-music styles to produce something both uniquely at odds with classification and pleasantly familiar.

KUNÉ, whose name means “together” in Esperanto, reminds us that powerful musical movements emerge from these tensely synergistic interactions, in which people from radically different backgrounds are tasked with the creation of collaborative art, and with it, a reaffirmation of our common humanity. This was the goal of Executive Director of Performing Arts for Canada’s Royal Conservatory of Music Mervon Mehta when he set out to create a music that “looks and sounds like Canada today.” And it is a message he hopes will resonate with Canada’s neighbors to the south as KUNÉ sets to embark on their first-ever U.S. tour with live performances and eclectic musical workshops at five tour stops including DROM in New York, NY; Colgate University in Hamilton, NY; Kutztown University in Kutztown, PA; and The University of Maine in  Orono, ME.

In conjunction with live performances, KUNÉ has developed four adaptable mobile music workshops designed to be taken on the road and put on anywhere. The workshops: “Power of the Song,” “Global Beat,” “Music of the African Diaspora,” and “Melodic Improvisation Around the World” run the pedagogical gamut from interactively teaching a small class of kids vocal and hand drum patterns of North America to engaging seasoned university-level music students on methods for adapting melodic improvisation traditions across cultural contexts, or even lecturing an auditorium-sized crowd about the folk music traditions of Burkina Faso and Brazil.

Each workshop is conducted by three or four band members and is adaptable in that they can be tuned to whatever age-group or audience demographic the context requires. The goal is to be flexible and be able to tailor lessons to any audience size, from five people sitting in a semicircle to two or three hundred people in an auditorium.

Kids are soaking up KUNÉ’s message and music too. Recently, the band performed and workshopped to around 200 third and fourth graders at a school with an 80% Muslim population spanning 50 different languages. “One bandmember speaks Baluchi, Hindi, Arabic and Urdu, so could relate to the kids in a way they don’t commonly encounter in Western schools. The children’s eyes just lit up and they went crazy singing and dancing to the songs because they’d never heard anyone playing their music in North America before,” reflects Mehta.

It was this very spirit of celebrating the many disparate patches that make up Canada’s national fabric that inspired Mehta to assemble the group during Canada’s last federal election when then-Prime Minister Stephen Harper used the term “old stock Canadians” in response to a question on his support of reduced health coverage for refugees. Like many, Mehta found Harper’s comment confusing and divisive.

“I’m an immigrant who came here in 1961,” he says. “So, am I new stock or old stock? Where does that put me, or my kid, who’s a mix of different ethnicities? So, I started to think, ‘What are we doing as a multicultural country, to really reflect our diversity – whether it’s in newsrooms, boards of directors, or on concert stages?’”

The project was originally meant to be a one-night stand but, even before their first concert, Mehta started getting calls from bookers and promoters with requests for the band to perform at various festivals around Canada, so they decided to do a tour. Within two years, KUNÉ had signed a record deal with Universal Music Canada, and a management deal with Opus 3 Artists, whose roster includes Yo-Yo Ma and his Silk Road Project, Roseanne Cash, and Béla Fleck.

The idea for KUNÉ had been a fascination of Mehta’s for years. He noticed he would see collaborations across cultures and styles fairly often in, say, the world jazz or in classical music communities, but not so much in the realms of world music.  The inherent challenge would be to figure out a way to work together, both as a band of indivivuals, but also technically/musically. And it took the better part of the six months KUNÉ had to prepare before their first gig just getting to know each other and getting to know how their traditions work and could work together.

Mehta spoke to how head-spinning it was. “For instance, beating four from our African drummer is a different four than the Cuban guy would make, and that’s a different four than the Peruvian guy would make! There's just a different kind of heartbeat in everybody from different parts of the world. And then, of course, that translates further into, say, a C major for a Western instrument is a slightly different C major than for another African instrument, much more so with the microtones of Arabic instruments. So we had to figure out a way to tune.”

And get in tune they did, but was that helped along by something in Canada’s water? Some innate element of national character that has allowed Canada to avoid many of the issues with borders, guns, and xenophobia so prominent in the U.S.? KUNÉ’s home-city of Toronto is extremely diverse, specifically in music. Many great musicians from all over the world have made there and Mehta insists it’s probably been much easier to put together this whole project there than it would have been in the “melting pot” that is the US.

“In Canada, we always think of ourselves more as a mosaic, rather than a melting pot, so that all the different cultures still have their original voice from where they came from ...just now also filtered through a Canadian lens. In contrast, the American immigrant experience seems to be more like  'come to America and become as American as can be, and leave your old countries behind.’ So I think that's a major historical and philosophical difference between the two countries, which has made this one band a little bit easier to form here.

The diversity of the band sets it apart though, even from your average cultural melting pot. And the  stories each band member brings to live performances – from reflections on their cultures and backgrounds, or the histories of their instruments, to stories about how they all survived the trials of making a new home in a foreign land, and how they all met and so effortlessly blended – are all so fascinating that KUNÉ captures hearts and imaginations, not just ears.

Says Mehta, “We didn't invent this, there's a lot more bands that are kind of sprouting up in Toronto and in Montreal, as well, that are multicultural. And I see some of that happening in New York and a few other places as well. So either we've been leaders, or we're right at the cusp of a multicultural explosion - but it's really cool to see all that happening.”